This is a new study, using a number of archaeological collections uncovered during the late 1990s, associated with construction projects that were not subject to professional archaeological study. These artifact assemblages were carefully salvaged by collectors and avocational archaeologists.

The study focuses on a series of features dating circa 1820 to 1850, which produced important samples of French goods dating to the first decades of the 19th century. Of particular interest is a number of French and Spanish coarse earthenwares, as well as evidence of a lingering use of french tin glazed pottery.

The study of the material has just begun, and funding is still needed. Clearly, however, the French character of certain parts of the city was alive and well during the early 19th century. Differences in consumer behavior between traditional French and American neighborhoods are vivid, even in the face of an increasingly mass-produced material landscape.

Fragments of a “faience brune” cooking pot, and a yellow glazed earthenware pot.

Maker’s mark on back of tin 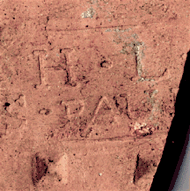 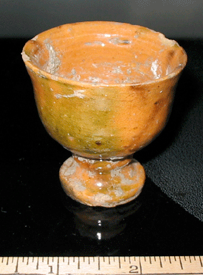