Excavated by Dr. Margaret Brown and a team of dedicated volunteers between 2004 and 2008, the Louvier site is located at the edge of the village of Prairie du Rocher , Illinois, which was founded in the 1720s. The artifacts from the project were analyzed

by the Sangamo Archaoelogical Center.

Dr. Brown’s work uncovered a large, stone-walled cellar associated with the family of Antoine Louvier Jr.  Based on initial archival and artifact analysis, the home appears to have been constructed around 1780, in part with well dressed limestones that had been salvaged from nearby Fort de Chartres (abandoned in the early 1770s). The house was abandoned around 1840.

The artifact assemblage from the stone cellar includes a wide range of domestic items from a traditional French farm family, including a number of iron tools found laying on the floor of the cellar.

The results of the artifact study are included in Mazrim’s book on French colonial domestic archaeology in Illinois. click HERE

The stone walled cellar, with double fireplace support in center.

European stoneware jug found buried upright in a small hole in the floor of the cellar. 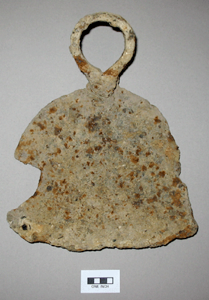 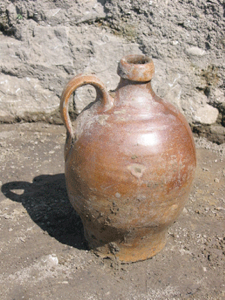 of the Louvier cellar.