Professional archaeologists have been looking for traces of what was known as the “Old” French Village in north Peoria since the 1960s. In 2001, roadwork required an archaeological survey of the neighborhood that was thought to have been the location of this village, established in the 1760s. The Illinois Transportation Archaeological Research Program asked the Center’s director Robert Mazrim to create a series of digital overlays of French maps onto the modern urban landscape. From these maps, he assisted ITARP crews as they began testing several city lots. These tests immediately encountered the first archaeological remains of the city’s French heritage. The excavation located a small house thought to be a slave’s residence owned by Louis Chatellereau, a French trader. A large stockade trench was also found to cross several modern city lots, and probably served as a boundary between the village and the common or agricultural fields of the colonial community. While most of the 18th century topsoil had long ago been removed, the subsoil features were found in a good state of preservation, just beneath the lawns of  late 19th century apartment buildings. Chatellereau’s  property was probably abandoned in the 1790s, and was not developed again until after the Civil War.

Plan view of the small dwelling - possibly a slave house - found in north Peoria. This is the first and only known archaeological remnant of a French house at Peoria.

In early 2004, the Sangamo Archaeological Center began examining French land claims associated with the second French village in Peoria, known as “La Ville de Maillet” (or the “New Village”). That village replaced the “old” village in the 1770s. Zealous American soldiers destroyed the new village during the War of 1812, and most of the archaeological remains associated with the French community were heavily impacted by the late 19th century industrialization of Peoria.

The 2004 study, however, deduced that a small portion of the archaeological remains associated with the New Village might lay intact along the river in the heart of the city’s modern urban landscape. Private landowners graciously allowed the Center's crew to perform initial testing, which involved deep trench excavations through five feet of modern fill. Unlike the excavations conducted in 2001 (which were funded by state agencies as part of proposed road construction), the efforts in 2004 were strictly research-based, and required private funding.

At the base of the test trenches was found an intact living surface, dating to the 18th century. Within that early topsoil were found the first artifacts associated with La Ville de Maillet. These include English creamware and American redware, gunflints, and animal remains such as deer, beaver and bison. A portion of a large stockade trench was also discovered, and may reflect a lot boundary. That lot is thought to have been owned by Antoine LeClaire, an important figure in the Illinois fur trade who would later establish the town of Davenport, Iowa.

THE “OLD” FRENCH VILLAGE AT PEORIA 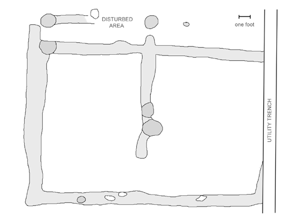 The results of the 2001 excavations were published in the Center’s Research Bulletin series. Though that publication is now out of print, the information is also included in Mazrim’s book on French colonial domestic archaeology in Illinois. click HERE 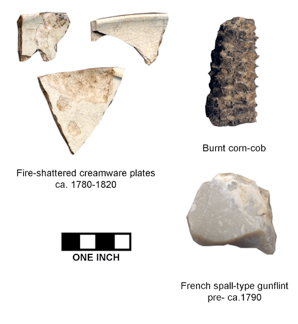 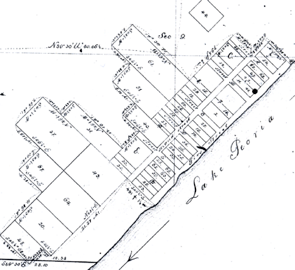 The Center is always interested in recording important archaeological artifacts in private collections.

This large "trade" kettle was found many years ago in the vicinity of Bartonville, south of Peoria. The large brass kettle was designed for cooking over an open fire. It measures 20 inches in diameter and 13 inches tall. It is finished around its rim with a flat iron band that is fitted with two hand forged iron "ears" where the carrying handle is attached. Such kettles were manufactured in France and England as early as the 17th century, but this example probably dates to the late 18th or very early 19th century. The construction of the kettle is visible in a vertical, dovetailed "seam" along one side.

Evidence of the use life of the kettle appears in the form of two holes, which have been patched with brass rivets. The outside surface of the vessel still exhibits traces of a charred residue from its use over many fires.  Its provenience - found in a forested upland setting away from the principal villages at Peoria - suggests that it was probably used at a sugaring camp, where maple sap was harvested and boiled down for making sugar. Such kettles were often left buried in maple groves, so that they could be used each season. This kettle was probably forgotten by its owner, and remained hidden in the former grove until the mid 20th century.

The results of the 2004 investigations are included in Mazrim’s book on French colonial domestic archaeology in Illinois. click HERE