The Duckhouse Site is located in downtown Cahokia, Illinois, in the backyard of a modern residence. Sangamo Archaeological Center and University of Illinois personnel conducted test excavations there in 2006, under the auspices of the jointly-sponsored French Colonial Heritage Project. These investigations encountered the well-preserved remains of a poteaux sur sole (post-on-sill) dwelling, yard-area pits, as well as what is believed to be a pre-1730 aboriginal house basin that predates the French dwelling constructed on the site around 1760.

The dwelling was probably occupied by Joseph Languedoc, a merchant.  The building may also have served as his store, and was abandoned around 1800. Highlights from the excavations include large samples of domestic artifacts found in spatially discrete deposits, yielding insights into past activities in and around the structure. The site has also produced one of the largest samples of well preserved faunal remains associated with French domestic contexts in Illinois.

The results of the excavations at the Duckhouse site are included in Mazrim’s book on French colonial domestic archaeology in Illinois.  click HERE

Dr. Terrance Martin has discussed the faunal remains in his article “The Archaeozoology of French Colonial Sites in the Illinois Country” in Dreams of the Americas: Overview of New France Archaeology (Quebec 2008) 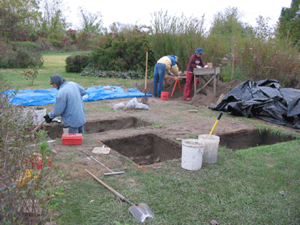 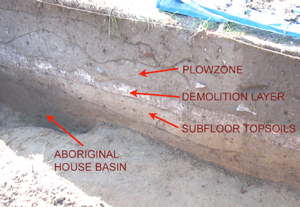 The complex soil stratigraphy beneath the

French structure at the Duckhouse site. 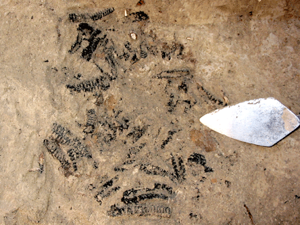 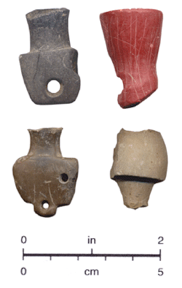 Remains of a “smudge pit” used to

The Gammon Site is located just outside of the modern limits of downtown Cahokia, Illinois. Sangamo Archaeological Center and University of Illinois personnel conducted test excavations in 2007, under the auspices of the jointly sponsored French Colonial Heritage Project. These investigations encountered the well-preserved remains of a massive poteaux en terre (post-in-earth) dwelling that was equipped with a large subfloor cellar and a stone fireplace. A particularly unique find was the “dedicatory” placement of a modified English smoking pipe at the base of a large post hole in the northeast corner of the building, prior to its construction.  The site yielded fragments of over 80 tin glazed earthenware vessels, as well as a wide range of domestic debris from the French colonial period. The Gammon site was occupied as early as 1740, and was probably abandoned in the 1790s.

The results of the excavations at the Gammon site are included in Mazrim’s book on French colonial domestic archaeology in Illinois.  click HERE 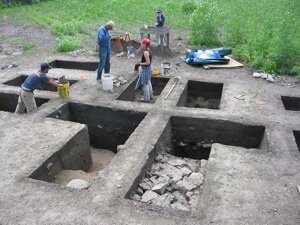 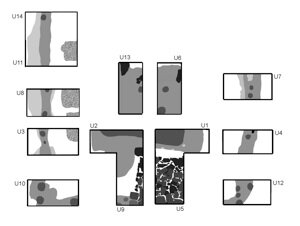 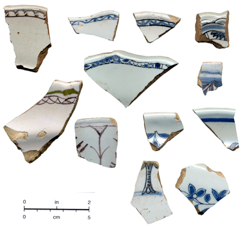 French faience from the Gammon site.

Built in Cahokia in 1807 by Nicholas Jarrot (who had fled France during the French Revolution), the “Jarrot Mansion” is one of the earliest surviving brick buildings in Illinois. Surrounded by a community of French vernacular log houses, the Federal style mansion would have been quite modern and fashionable for its time.

In 2007, the Sangamo Archaeological Center and University of Illinois personnel conducted test excavations in an area that would have been in the “back yard” of the home during the early 19th century, but is now owned by the Church of the Holy Family Parish. The work was conducted as part of a survey of church properties across the historic neighborhood.

The limited excavations revealed well-preserved archaeological deposits, and encountered a large, shallow, ovoid basin used to “slake” lime prior to mixing mortar. That mortar was then used to build the nearby brick house. 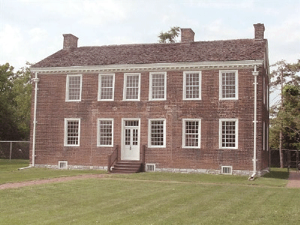 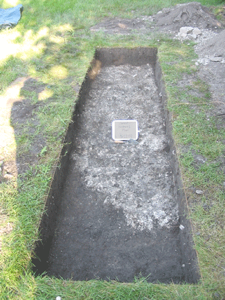 The Jarrot Mansion in Cahokia, Illinois