The Cadotte Site is located on Madeline Island, in northern Wisconsin. It was investigated in the 1960s by Leland Cooper of Hamline University, but the results of those investigations were never reported. In 2005, the Sangamo Archaeological Center funded a brief reexamination of the collections, now curated by the Wisconsin Historical Society. Two principal components were recognized:

- A circa 1600-50 occupation is thought to represent a specialized trading and feasting locale utilized by visiting Odawa and Huron and hosted by regional Ojibwe residents prior to the Dispersal of 1649. The archaeological sample is dominated by Huron-style pottery, consisting of many dozens of pots.  Some of these were probably made by the Huron, and some by their Anishinaabe trading partners and hosts. Also included in the assemblage are other regional pottery styles, indicative of trade with (or the presence of) the Dakota, Cree, and Illinois.  The 17th century component also includes a small number of European trade goods, consisting primarily of recycled brass objects, small iron tools, and a “Jesuit” style ring.

- The portion of the Cadotte site investigated in 1961 may have been partially abandoned (or utilized less intensively) for over a century, before its reoccupation by the extended Michel Cadotte family, who operated a trading post there between circa 1790 and 1835. This later occupation produced brass, iron, and silver trade goods, as well as domestic debris such as Staffordshire pottery and small amounts of bottle glass.

A mid 17th century Jesuit-style ring with an “L-Heart” design on plaque.

An example of what may be an Anishinaabeg “imitation” of Huron tradition pottery from Cadotte, circa 1640. 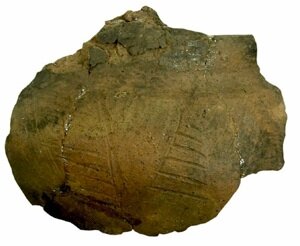